Lazy-load a component in Angular without routing

One of the most desirable features in Angular is to lazy load a component the time you need it. This approach provides many benefits to the loading speed of the application as it downloads only the required components when you need them. Furthermore, it is a very straightforward procedure through routing that is documented in the Angular docs. However, what if you do not want to use the router, or you want to lazy load a component programmatically through your code?

To highlight that scenario, let’s create a minimal angular web app without routing with a button that shows a form when we click it. We will use, also the Angular Material to have a simple and beautiful design.

The LazyFormComponent defines a simple reactive form with two inputs, a name and email, and a submit button:

Finally, the AppModule glue everything together and imports the corresponding modules mainly for the Angular Material:

The final result is: 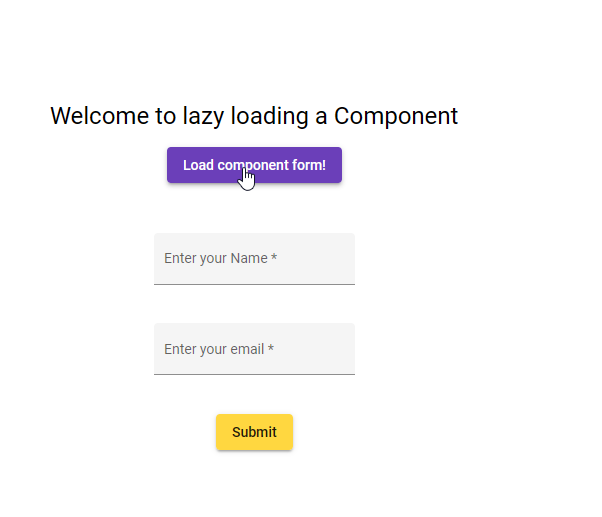 What if we want to load the LazyFormComponent and their related material modules when we press the button and not the whole app?

We cannot use the route syntax to lazy load our component. Moreover, if we try to remove the LazyFormComponent from AppModule, the app fails because the Ivy compiler cannot find the required Angular Material modules needed for the form. This error leads to one of the critical aspects of Angular: The NgModule is the smallest reusable unit in the Angular architecture and not the Component, and it defines the component’s dependencies.

There is a proposal to move many of these configurations to the component itself, making the use of NgModule optional. A very welcoming change that will simplify the mental model which programmers have on each angular application. But until that time, we need to create a new module for our LazyFormComponent, which defines its dependencies.

For a NgModule with one component, defining it in the same file with the component for simplicity is preferable.

So, the steps to display our lazy component is:

The AppComponent has transformed now as (the changed lines are highlighted):

In Angular 13, a new API exists that nullifies the need for ComponentFactoryResolver. Instead, Ivy creates the component in ViewContainerRef without creating an associated factory. Therefore the code in loadForm() is simplified to:

Finally, we added the LazyFormModule class:

Everything seems to work fine: 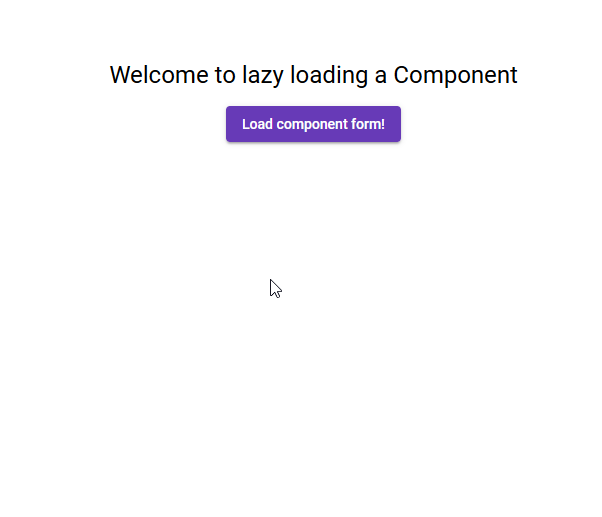 Let’s say that we have a BackendService for our form submission form:

Moreover, this service needs to be injected in the LazyFormComponent:

But, when we try to lazy load the above component during runtime, it fails spectacularly:

Therefore, to make angular understand the need to load BackendService, the new steps are:

To access the component through the compiled module, we implement a helper function in the NgModule:

Therefore the code for lazy loading the LazyFormComponent on loadForm() function transforms to:

Again, Angular 13 has simplified the above API. So now, the NgModule for the LazyFormComponent does not require injecting ComponentFactoryResolver. Therefore we only return the component:

Furthermore, we do not need to inject the Compiler service because the compilation occurs implicitly with Ivy. So, instead of compiling the module, we only get the reference to it with the createNgModuleRef function:

What if we want to pass some values or listen to some events from our lazy loading component? We cannot use the familiar syntax for a defined component in a template. Instead of that, we can access them programmatically.

For example, we want to change the text of the submit button on LazyFormComponent, and we want to be informed when the form is submitted. We add the required attributes, an Input() attribute for the prop buttonTitle and an Output() for the formSubmitted event:

The createComponent function returns an instance of the component which we can set the props and listen to the events through their observables:

You can check the complete sample solution in the GitHub repository here:

Or the Angular 13 version:

Code-splitting and lazy-load components have their uses in modern web development, and I think with the changes in Angular 13, it has been simplified a lot.

by Konstantinos Zagoris
December 30, 2020
7 min. read
Vue’s primary motivation behind the introduction of Composition API was a cost-free mechanism for reusing logic between multiple components or apps. Is there a way to use that approach for AlpineJs without sacrificing its simplicity?
Alpine.js Vue.js Netlify JavaScript
Continue Reading

by Konstantinos Zagoris
February 28, 2021
10 min. read
One of the most common web app patterns involves collecting data from a form and submitting it to a REST API or, the opposite, populating a form from data originating from a REST API. This pattern can easily be achieved in Alpinejs using the native javascript Fetch Api. As a bonus, I describe the fetch async version at the end of the article.
Alpine.js JavaScript
Continue Reading

by Konstantinos Zagoris
February 2, 2021
9 min. read
One of the most frequent requirements when writing AlpineJs components is the communication between them. There are various strategies for how to tackle this problem. This article describes the four most common patterns that help pass information between different Alpinejs components.
Alpine.js JavaScript
Continue Reading